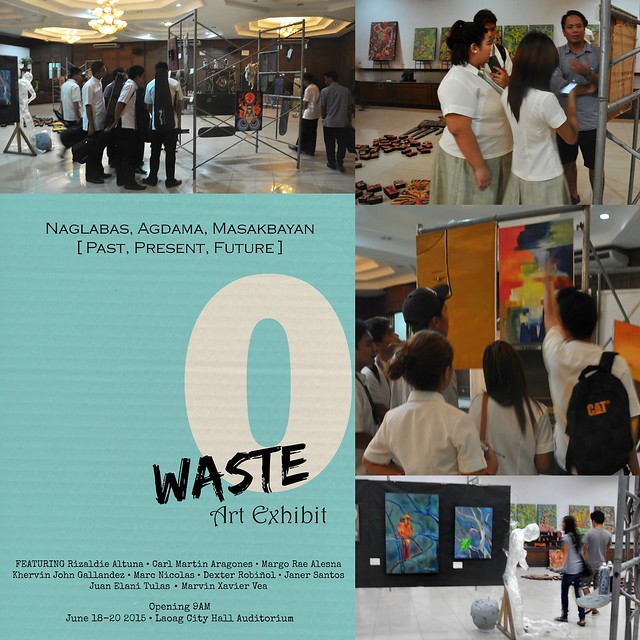 The Laoag City 50th Charter Day Anniversary was the perfect venue for the just concluded “naglabas, agdama, masakbayan [past, present, future]” eco art exhibition, inspired by “basura ti naglabas, tignay ti agdama, para ti narimat a agsapa”. To borrow the words of Francis Kettering, we should all be concerned about the future because we have to spend the rest of our lives there.

Seasoned Ilocano artists and rising local talents pooled their efforts to draw attention to environment issues such as the global plastics issue, environmental degradation through tree cutting, dynamite fishing, irresponsible consumerism, among others. Guests were appreciative of the art created from everyday waste such as styro containers, packing materials, empty bottles and cans, used motor oil, and space-eating trash such as abused skateboards, scratched vinyl, old toys,  galvanized iron sheets and so on. 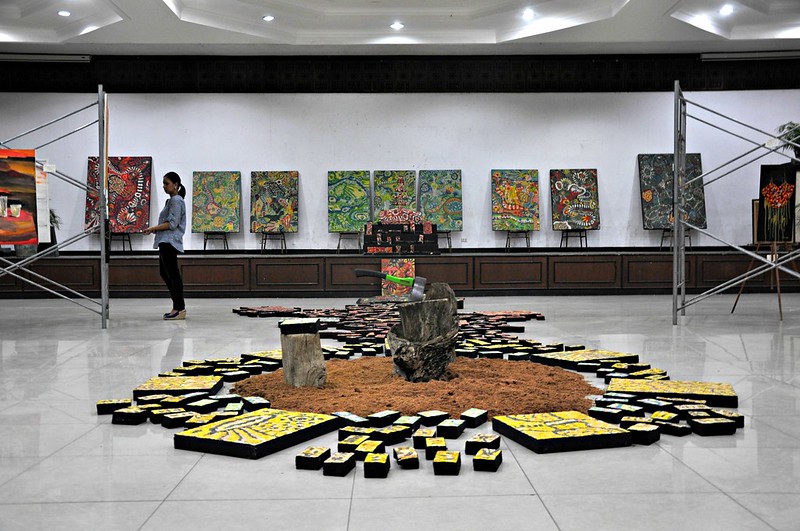 Garnering good reviews and requests for a rerun, the zero waste art exhibit was a worthy show of local artistry. Juan Elani Tulas’ art installation from styro and 400 pieces of wood scraps, entitled “Poetree”, was inspired by Joyce Kilmer’s “Trese”. Each enigmatic piece can stand on its own. Janer Santos, a tattooist by profession, infused humor into his compositions. “Pagfiesta-an” with recycled junk is rather provocative. UP Fine Arts graduate Margo Rae Alesna had a winner in “The Heart of the Matter” in mixed media on old wood. Young artist Gerome Malbas put to good use his predilection for pop art by turning used spray paint cans as his canvas. His “Mandala” inked skull was unexpected. Khervin John Gallandez put life into rusty galvanized iron scraps. To convey his message of anti-dynamite fishing, MMSU student Marvin Xavier Vea incorporated his intricate doodle art into an installation. Carl Martin Aragones and Dexter Robiñol highlighted the wonders of nature with vibrant colors while Rizaldie Altuna used heritage as the subject of his mixed media work. Reluctant artist Marc Nicolas made his debut via his scotch tape sculpture. 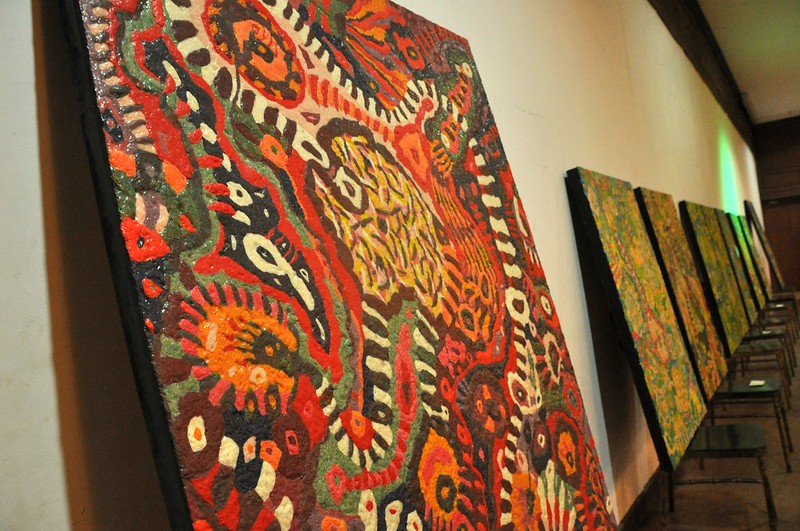 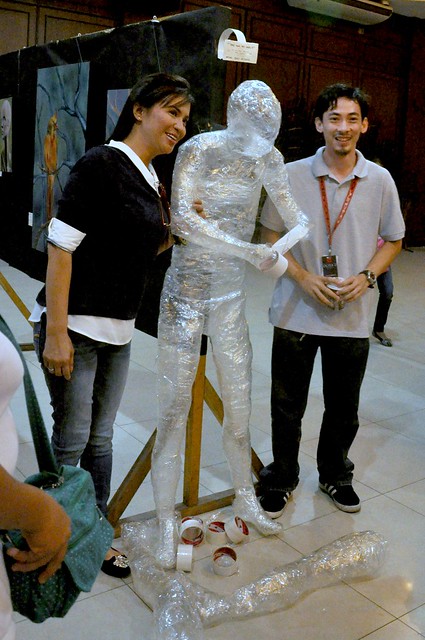 When styro artist Juan Elani Tulas messaged me for a possible collaboration with LEAD Movement, I didn’t think twice even if it meant I had to bypass protocol within the organization (LEAD is a NGO, btw) and work double time, with barely two weeks preparation. By happy chance, Laoag Mayor Chevylle Fariñas was open to community involvement. A proponent for a clean environment, the City of Laoag hopes to sustain its initiatives and efforts in environment management, among them the banning of plastic bags. 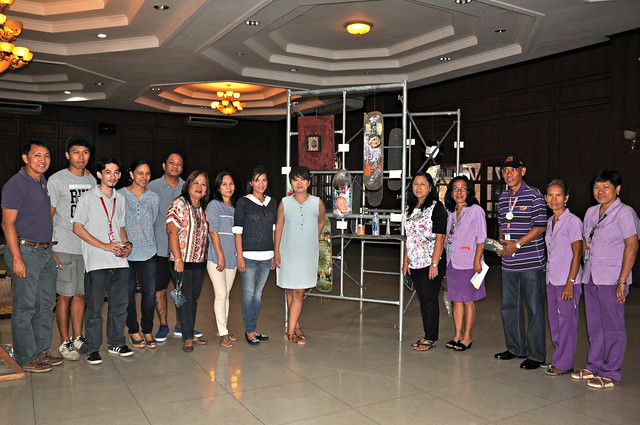 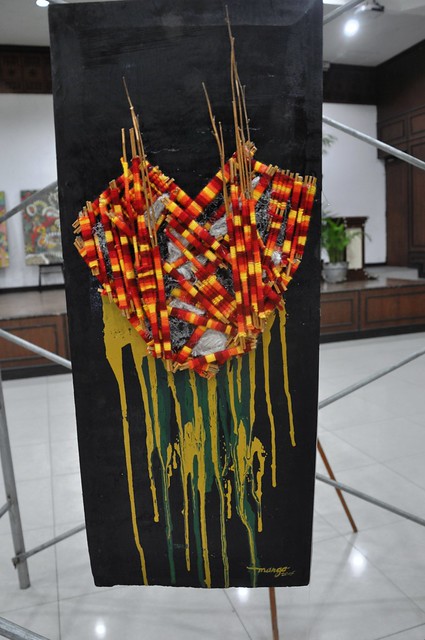 The Heart of the Matter. 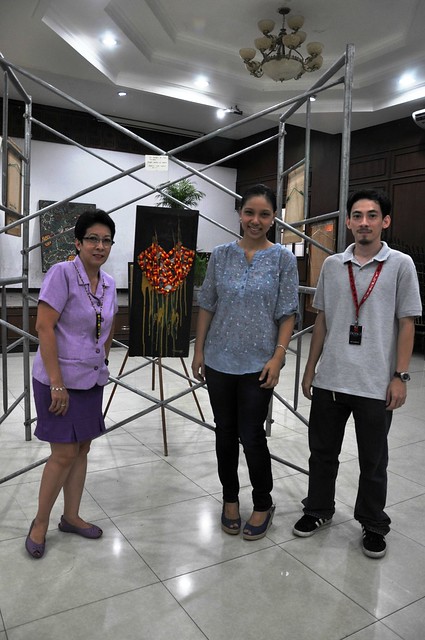 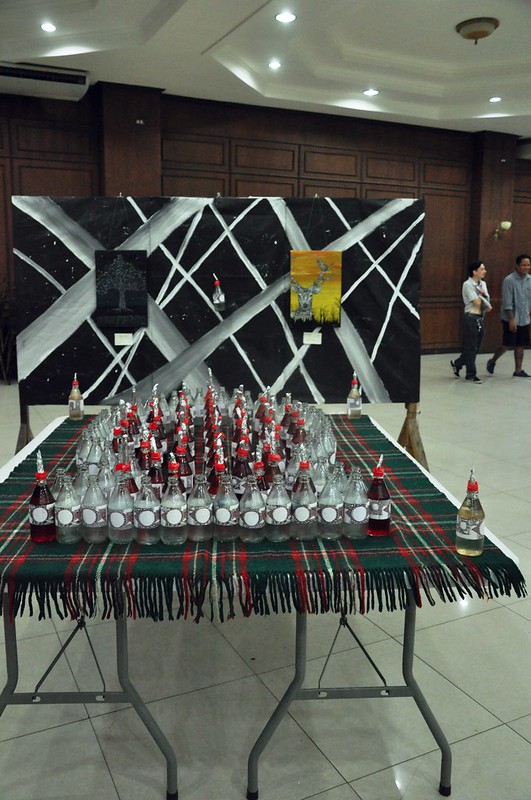 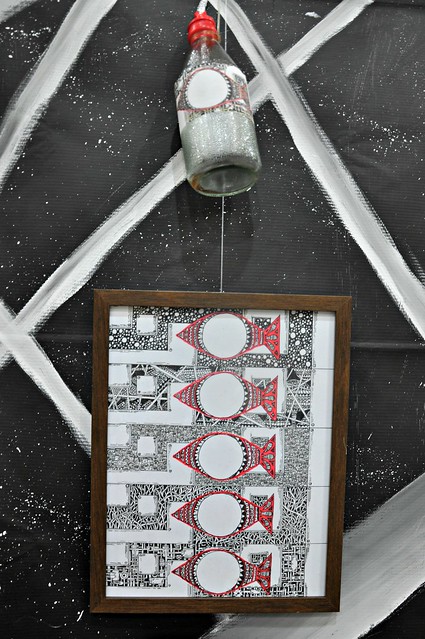 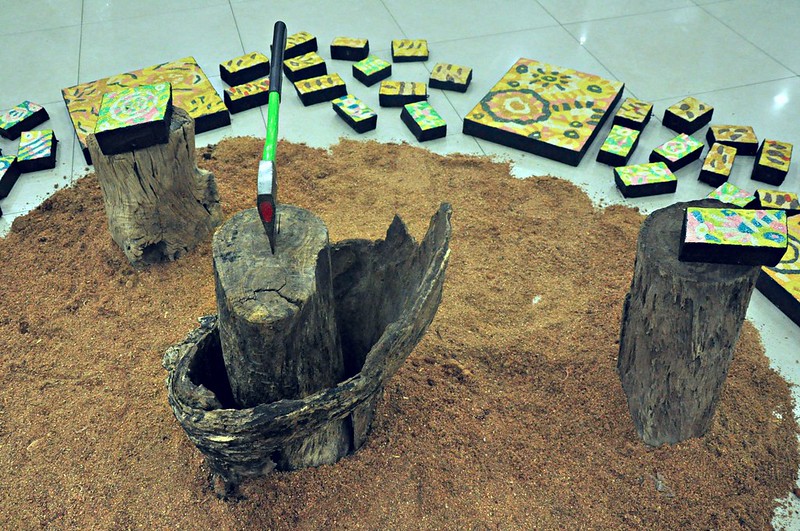 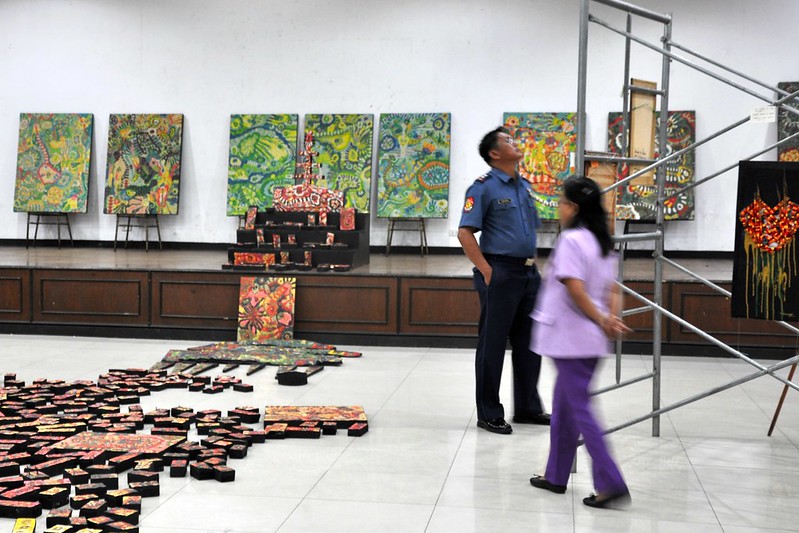 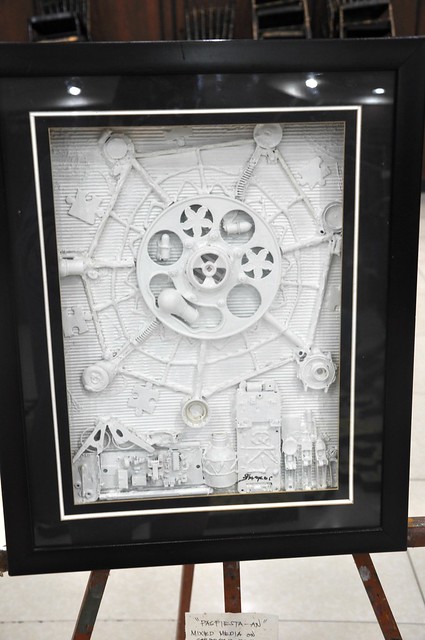 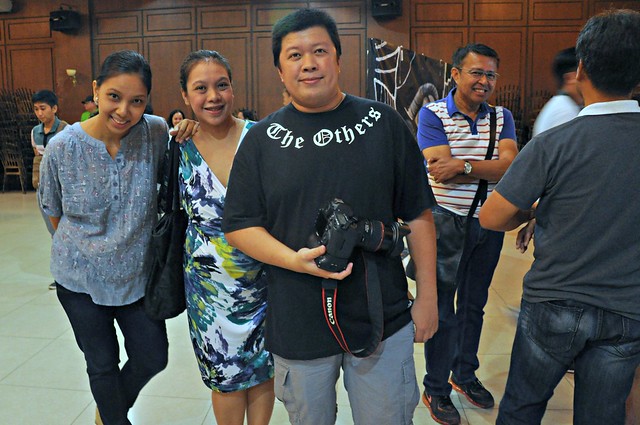 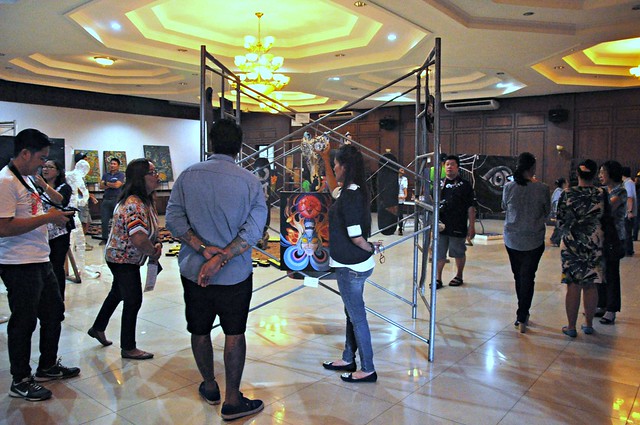 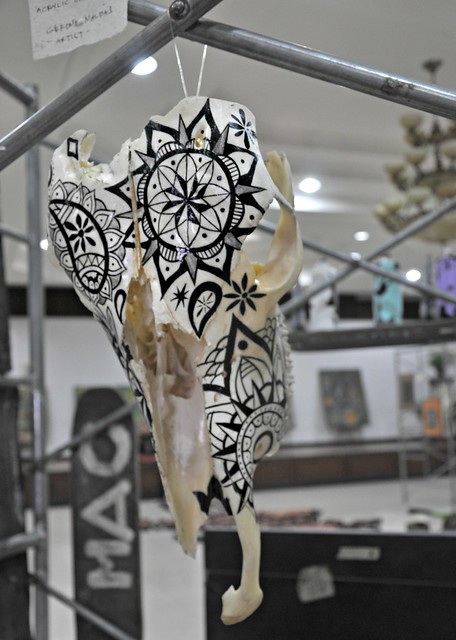 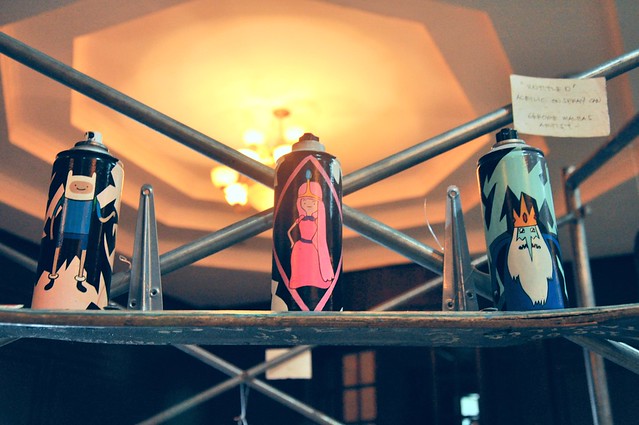 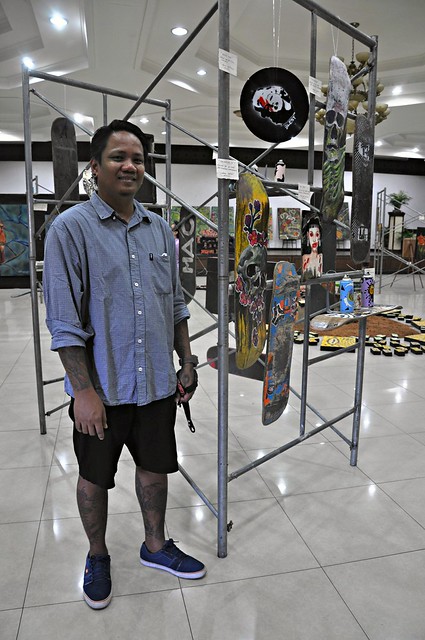 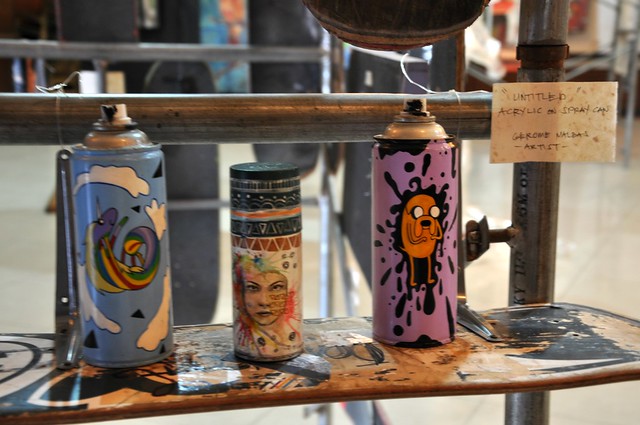 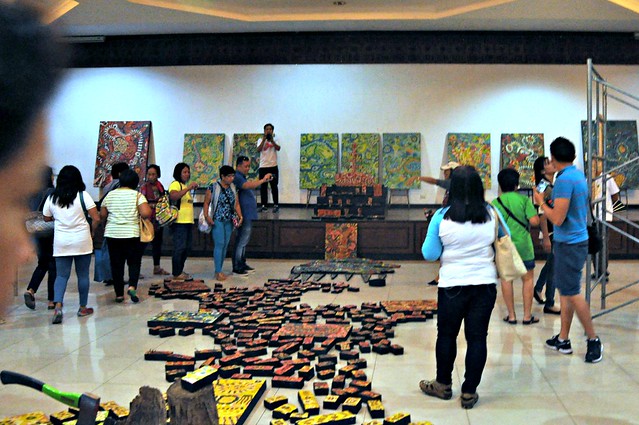 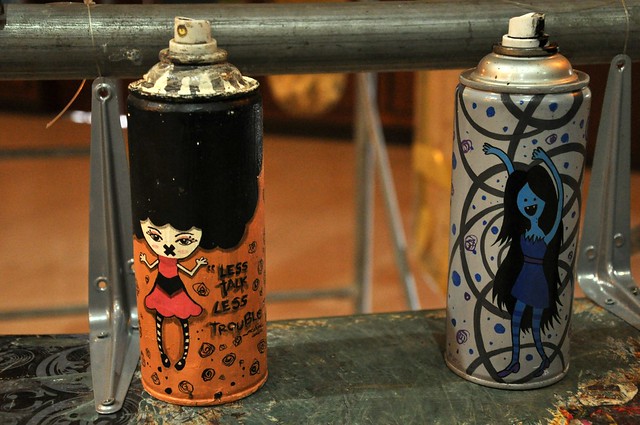 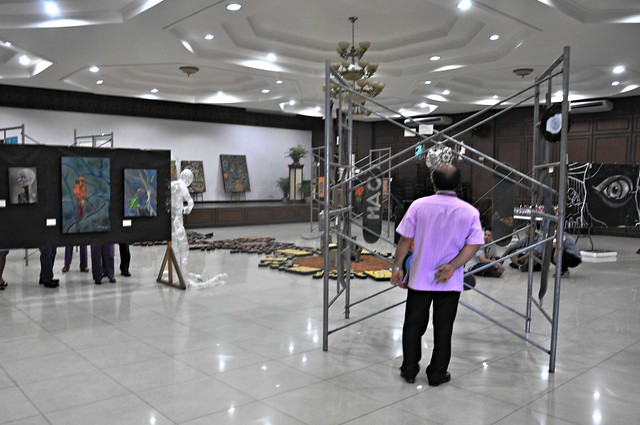 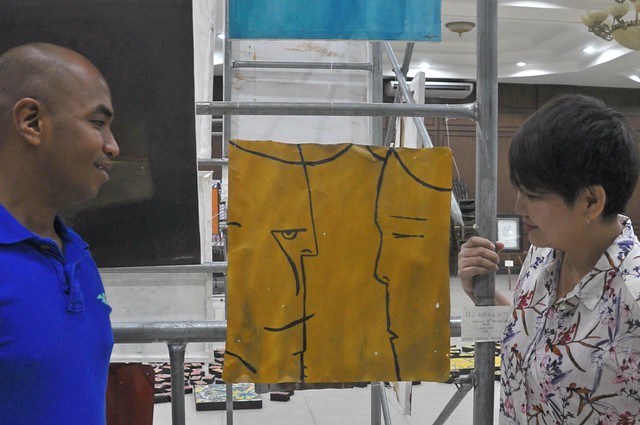 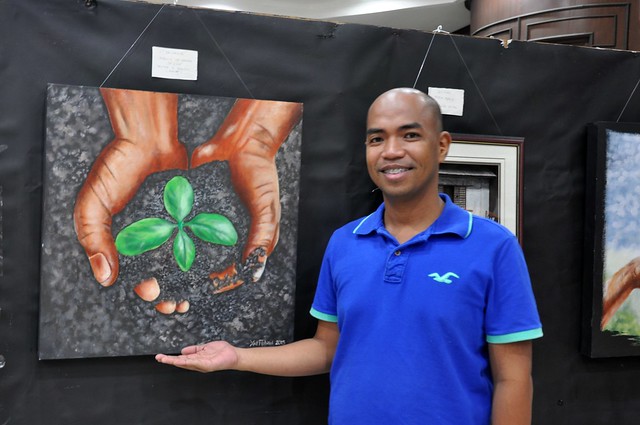 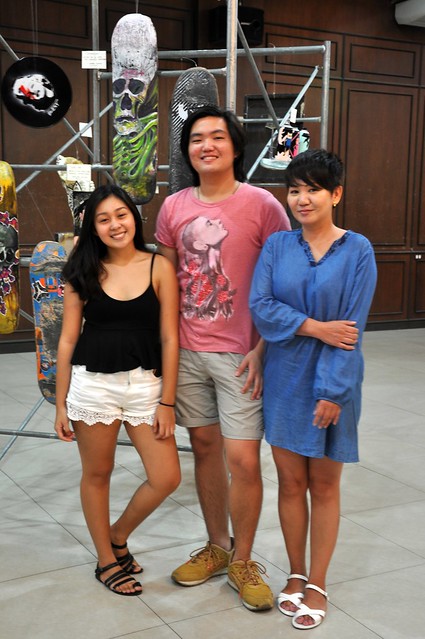 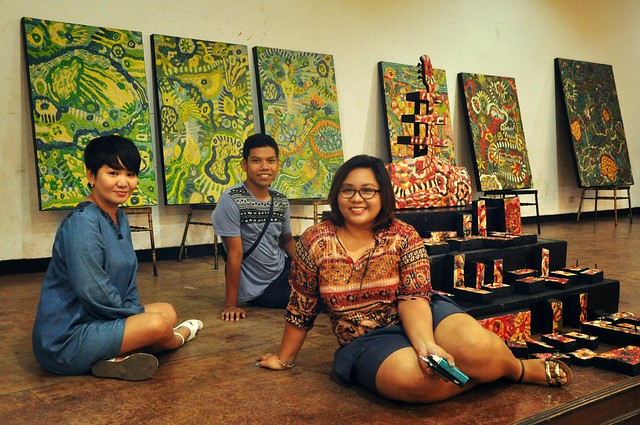 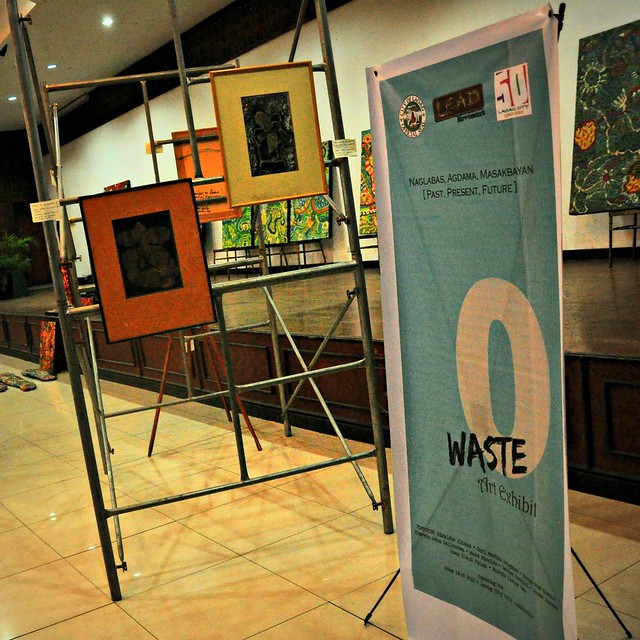 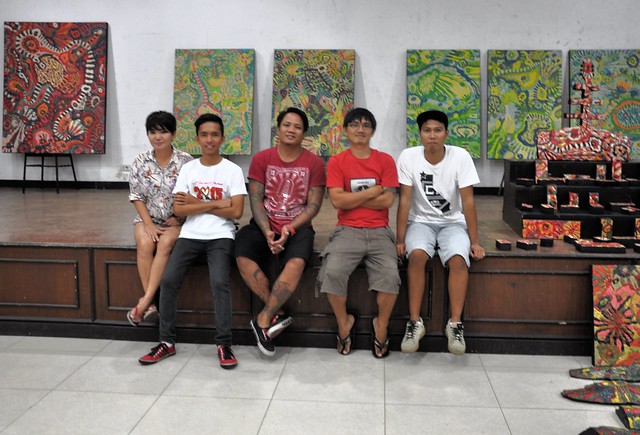 With me from left to right are Marvin Xavier Vea, Janer Santos, Juan Elani Tulas and Khervin John Gallandez.

LEAD Movement would like to extend its gratitude to the City Government of Laoag for allowing the use of the city hall auditorium, Mayor Chevylle Fariñas for her invaluble help and for welcoming artistic freedom as a tool for change, the artists, the staff of the GSO and mayor’s office and those who viewed the show and continue to share the advocacy.