Alexa couldn’t be happier getting her dose of art and culture in a green setting. Chanum Foundation’s Tam-awan Village was set up by national artist BenCab in 1998. It has been bolstered up over the years. We failed to catch solar painter Jordan Mang-osan, who guided us when the Cordillera village garden was in its infancy stage. The colors of the environs are more saturated, fetching happy spiritedness.

From time to time, art exhibits, workshops and cultural events are facilitated by Benguet local artists. The Ifugao and Kalinga huts are adorned with contemporary artwork, reflecting the dynamic culture of the Cordilleran peoples. There are small fees to be paid to help sustain this estimable project of preserving culture as a fresher means for the enjoyment of younger generations.

The cafe and crafts shop has grown bigger and better. They have an interesting, very current menu of crisp upland salads, crepes, sandwiches and native meals such as pinikpikan. Still the same excellent brewed local coffee that Reny loves. I don’t know how many times his cup was refilled with coffee and great memories of mountain biking under Benguet’s killer road conditions back in the 90s. Brandon was absorbing the advetures in the cantilever brake era, while Alexa seized the chance to sit for portraits by artists Jenny and Alfred for the price of one.

The huts are up for lodging.

Photographed by Alexa, Brandon and Blauearth
© Blauearth™ All Rights Reserved 2009-2013 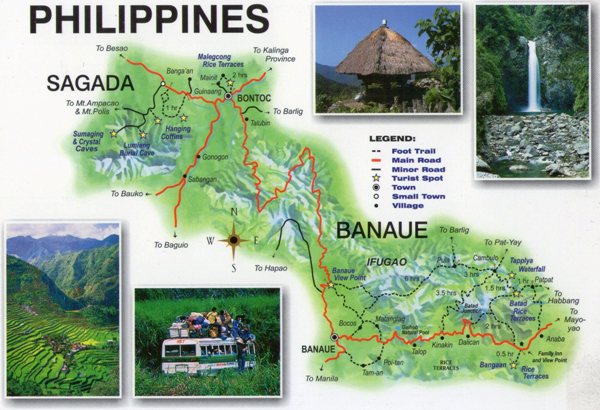 Earth Day 1996. From Baguio, I tagged along behind the Ace Bikers, a group of mountain bikers, who dared pedal their stiffys (hardtail bikes) on one of the killer roads in the world, the main artery of the Cordillera road system, the Halsema Highway (at a time when the winding road was at its worst), to Mt. Data Hotel (110 km) on the first day, and continue the grueling ascent to Sagada (60 km) via dirt road on the next day to complete the first Baguio-Sagada Bike Challenge organized by Padma Lim Perez of Solana’s Manna. A frickin’ adventure for all us that soon ignited a love affair with the Cordillera Mountains. The road trip will be forever etched in my memory. It was freaky, but tremendously fun! I don’t even know where to start if I list down all the weighty elements. 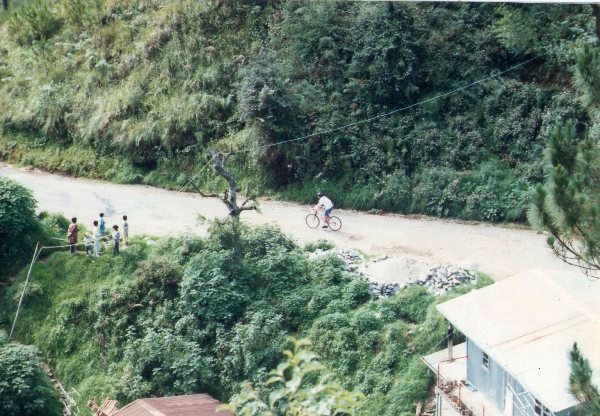 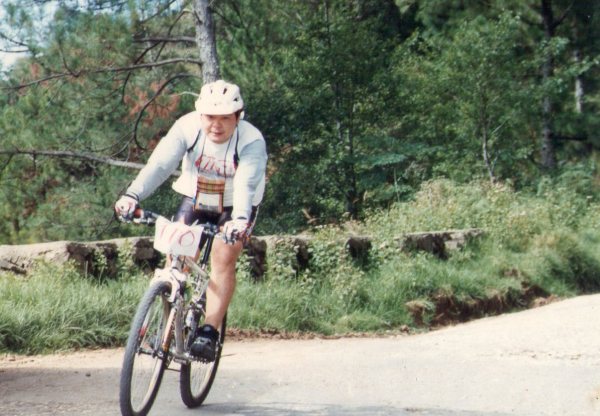 The daring mister was a big influence in my burgeoning career as a professional adventurer. An offshoot of Ace Bikers — in the year 1999, together with Benny Arce, they masterminded the establishment of the Province of Ilocos Norte Adventurers, Kampers Bikers and Eco-Tourism Group, otherwise known as PINAKBET (it was Benny who coined the acronym), but eventually left the group in 2004 to form the LEAD Movement or the Laoag Eco-Adventure Development Movement, which specializes in ecotourism development.

The photo above says we went back to Sagada in 1999. It would have been a lot sooner had I not given birth to my fourth baby. We brought along two kids and the other two were left at home. That trip on our first Land Cruiser, an F40, was extra bumpy and excruciatingly  long. Halsema Highway was still as freaky as ever. 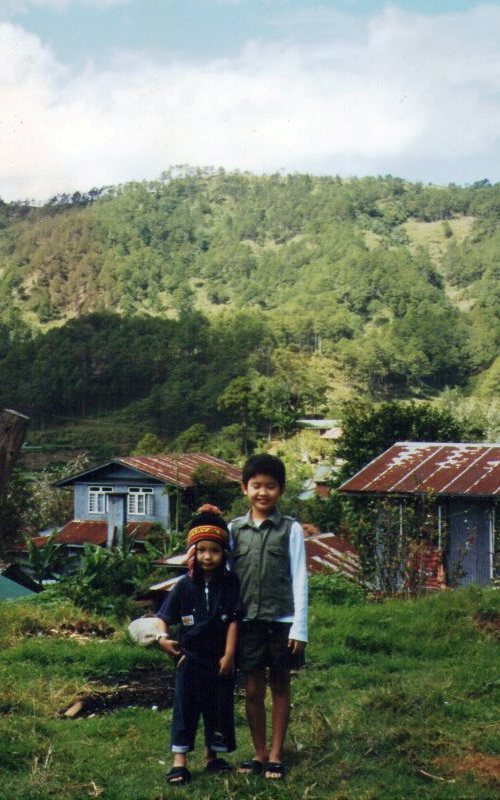 We stayed once more at the St. Joseph Inn, a pretty comfortable inn run by nuns. The kids were still too small for extreme adventure, so we just walked around town, let them see the hanging coffins and drove to places like the Sagada Weaving Center, Lake Danum and nearby Bontoc, where my Chinese-Igorot relatives live.

We always ate at the cafe in the inn. The employees soon became our friends. Food had to be ordered in advance. Our standard eat was pork chop with buttered vegetables. Although there weren’t many food options available, everything from the kitchen was obviously fresh, deliciously organic and affordable.

The weather is cool, but can get chilly when it rains. Rustic-but-lovely Sagada is a place where one can temporarily liberate himself/herself from all the trappings of a citified life. Surprisingly, there’s nothing more refreshing than a cold water bath in the morning! 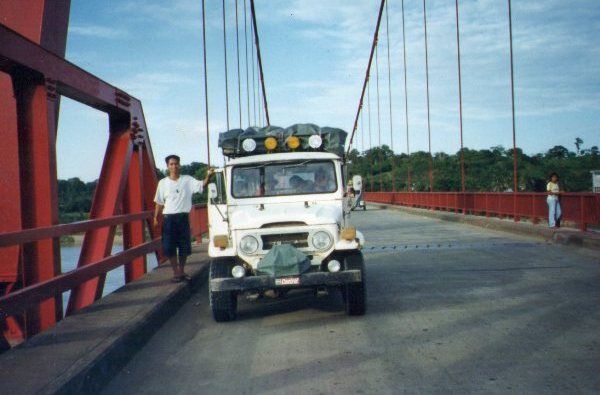 That’s the Mangapit Suspension Bridge in Cagayan. From Sagada, we traveled back to Ilocos through Isabela and Cagayan. It was one hell of a ride in the middle of summer! I really can’t figure out how the kids and I managed to survive at the back of the cruiser.

A true adventurer isn’t whiny. I can get a little whiny, but only for a while, and then I crave for more — and so we went to Sagada anew. On this trip, we stayed overnight in Banaue. 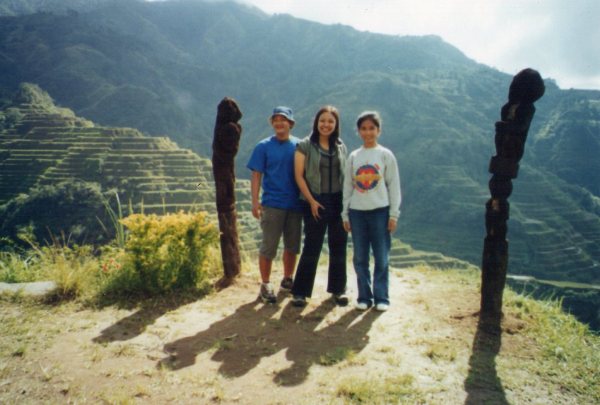 We didn’t make it to Batad, but we were able to get a fine view of the world-renowned Ifugao Rice Terraces at the view deck for tourists.

There were apparent changes in Sagada. All the hotels seemed full, there was cell phone coverage and there were more eateries around. We ate yummy homemade yogurt with preserved strawberries at the Yogurt House and gourmetish hard-crusted bread, baked by a Frenchman, at Alfredo’s.

This was my baby’s first long trip. The baby and I stayed behind, while the mister, my good friend Ona and the rest of the group went spelunking in Sumaging Cave. I slept my ass off, well, so that there is something new if and when I go back again. Oh, this time around, we had the luxury of a hot water shower.

November 11, 2004. My LEAD Movement buddies and I hied off to Mt. Pulag National Park. The borders between the provinces of Benguet, Ifugao, and Nueva Vizcaya meet at Pulag’s peak. We passed by the Ambuklao Dam on our way to the Ranger Station (along the Ambangeg Trail), where we were given a seminar on the donts in the park and the Leave No Trace creed. 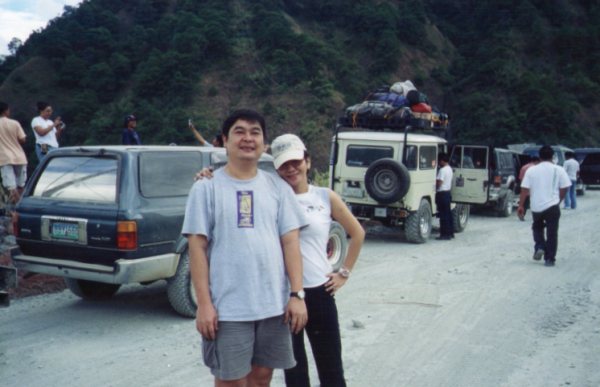 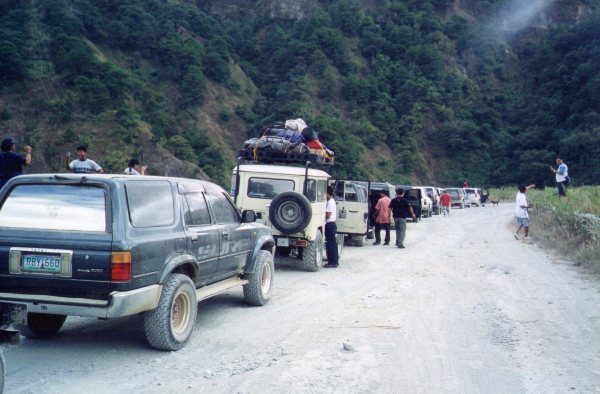 Who would have thought that I could reach the second highest peak in Luzon and the third in the Philippines? Out of more than 50 climbers, I clocked in fourth. I know climbing mountains shouldn’t be a race, but hell yeah, momma! I’m  proud of my little achievement — 2922 m ASL!

Sadly, these are my only photos of the climb. The endemic flora at the different forests were fabulous. Frozen, all I could think of was climb and climb until I reach the summit Thank God, he created bushes! Sue me, I think I even peed on my pants. 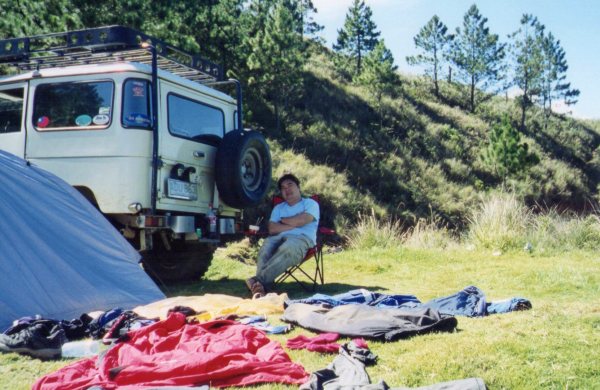 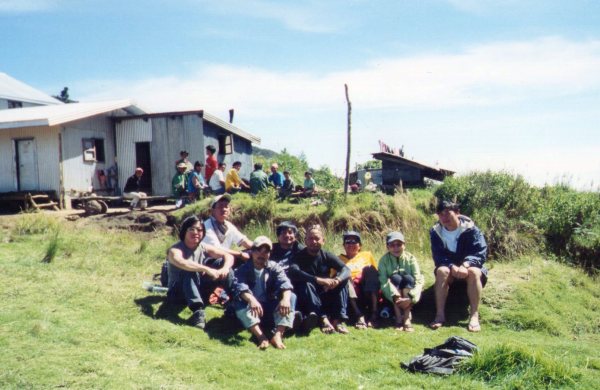 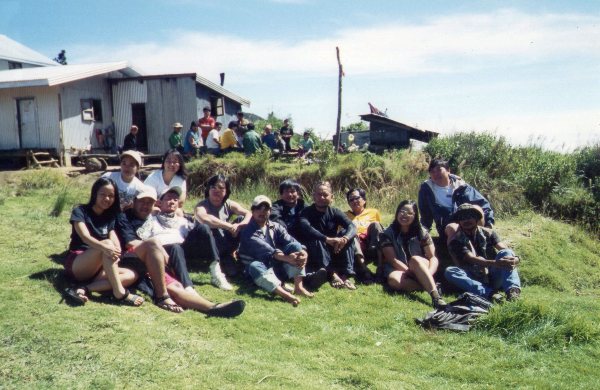 Just one mini-rant — you need to go back to Baguio to use a toilet.

Soon enough, we went back to Sagada. On this last trip, we took the Cervantes route. I was with the mister, Ona, Boyet, Buda, Larry, Berna and all of our little boys. We trekked to Bokong Falls and, finally, I was able to experience the thrill of spelunking at Sumaging Cave. It was the second coming of awesomeness! My bestest adventure was a chopper rappel, but that’s another story. 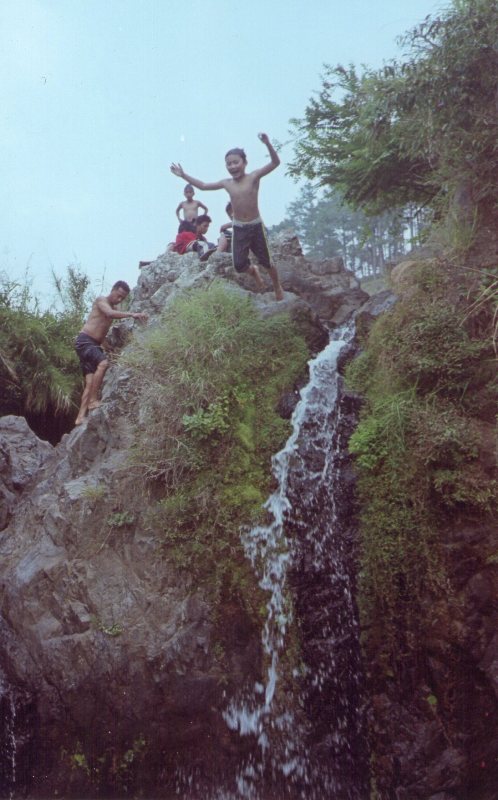 Hope to see you soon, Cordilleras. 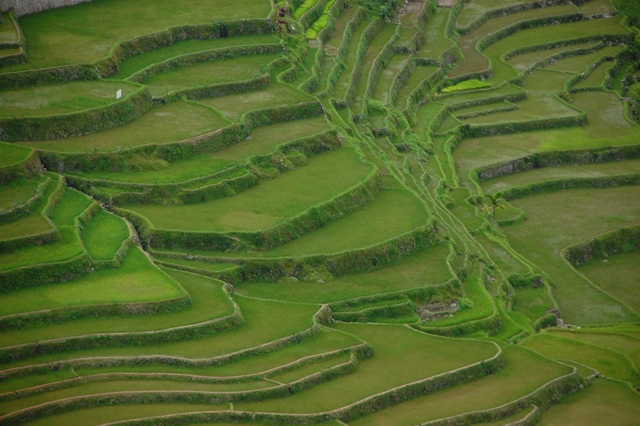 The UNESCO describes the rice paddies carved into the mountains of Ifugao as “the fruit of knowledge handed down from one generation to the next, and the expression of sacred traditions and a delicate social balance, they have helped to create a landscape of great beauty that expresses the harmony between humankind and the environment.”

However, the age-old man-made structure, fed by an ancient irrigation system from the rainforests above the terraces,  was added to the list of World Heritage Sites in Danger in 2001 as uncontrolled tourism, the introduction of open-market economy and brain drain threaten both the natural heritage of the province and the traditional practices of its inhabitants.

A proud son of Ifugao

Passionate artist Ruel Bimuyag  is a fine inspiration to the new generation. Fighting to protect the wealth of  heritage and traditions of the Ifugao in the Cordillera Central, Ruel, a BS Tourism graduate of the University of Baguio, has traveled to many parts of the world as an ambassador of his homeland. He has joined numerous photo exhibits, won several prestigious photo contests, attended various conferences and forums, worked with outstanding Filipino artists, such as  filmmaker Kidlat Tahimik and alternative musician Grace Nono, in cultural  events and festivals both here and abroad.

As one of the first ISST-DOT-trained ecoguides in the country, Ruel is now armed with more knowledge and skills that he can re-echo to his locality to further protect and conserve a national cultural and natural wealth that is an “important contribution to humanity.”

“Immersed in my own Ifugao culture since my birth in 1979 in Baguio City, Philippines, I constantly carry two advocacies: culturally-sensitive photography & the development -preservation of indigenous knowledge systems and practices.

Cordilleran culture has permeated my life since childhood in the Ifugao community of Asin Road, Baguio City. Coming from an ancestry of strong practitioners of indigenous rituals, I was treated several times by age-old curing rituals when conventional medicine failed. Thus, it has strengthened my belief of my ancestral wisdom which much people of today’s world still see as obscure.

I believe that preservation is a limiting approach to the continuing practice of indigenous knowledge. Specializing in ethno music, I am a teacher, a facilitator, a performer and a humble student learning rhythms, dances, chants, and instrumental musical patterns of my Cordillera Culture.

Scholars on the Cordillera tend to predict the demise of our region’s indigenous cultures.  I observe that our culture is alive, thriving and evolving. Through my photographs, I am building a “positive portfolio”, a testament of our indigenous cultures and to the depths of my roots.” 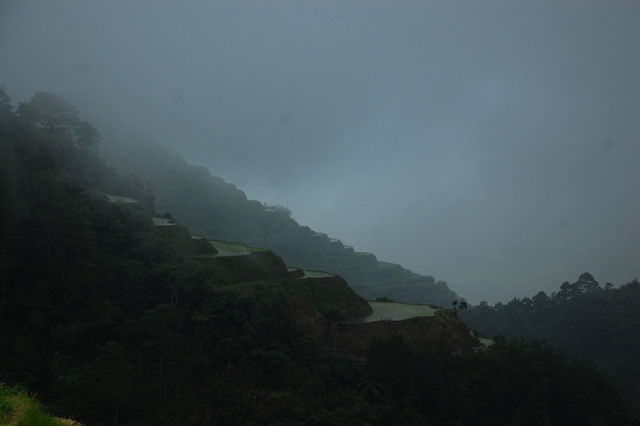 (View Ruel Bimuyag’s entry to the 2007 Greenpeace ‘Project Clean Water’ photo contest with the theme “Celebrating Philippine freshwaters and looking at its threats.”)