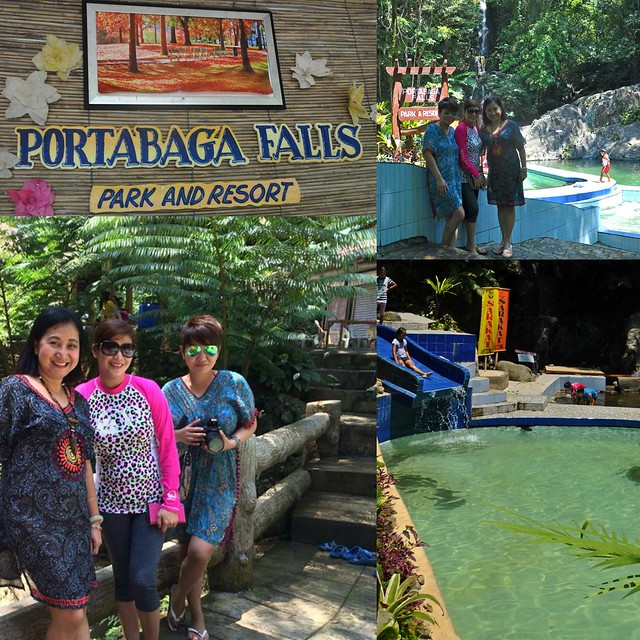 From Balaoi, Pagudpud, we went farther north to visit Portabaga Falls in the charming, verdant little town of Sta. Praxedes, the first town of Cagayan if you are entering from Ilocos Norte. It’s May weather hot all over. Caught Mayor Esther Aguinaldo before the huge TV, awaiting the fight of the century (as of this writing, we all know what happened next). 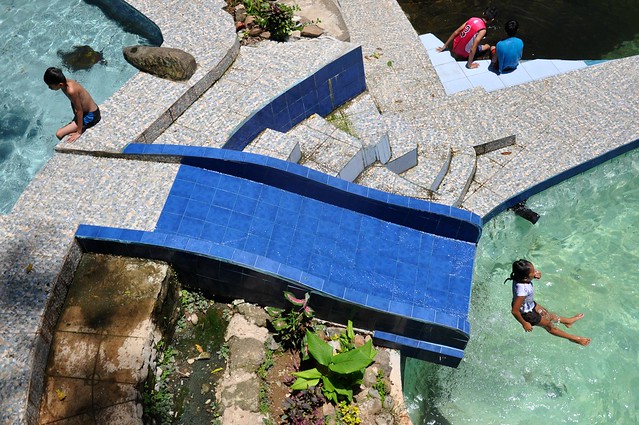 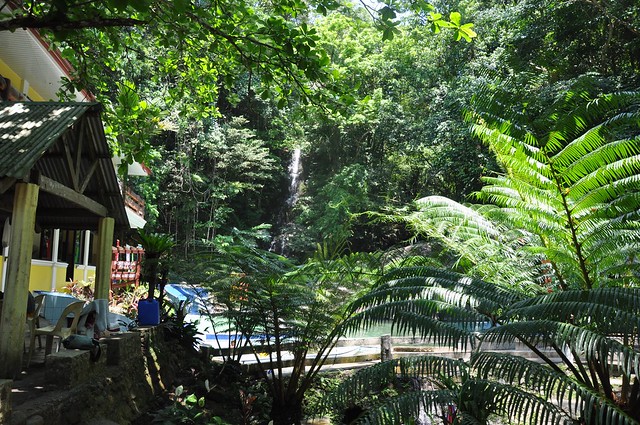 The water cascading to a mix of adult and kiddie-friendly catch pools is cool, fresh spring water. She explains that the pools are emptied at the end of the day, but the water doesn’t go to waste as it is used to nourish farmlands. Through diligence and support of benefactors, the nature park has prospered with additional facilities, particularly comfortable family, standard and dormitory-type accommodations, a spacious function hall and more shaded areas, and is projected to boost tourism in her town. It’s wonderful to know that trekking to the forested environs is another activity being offered by the local government-managed park and resort.

Here’s a video of the waterfall (taken during cooler months I assume), which I found on the net. 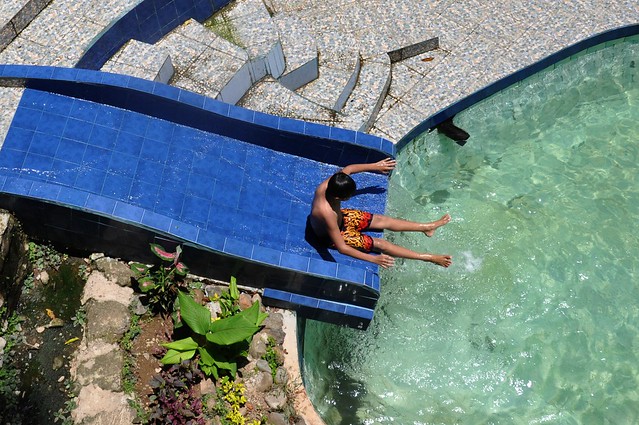 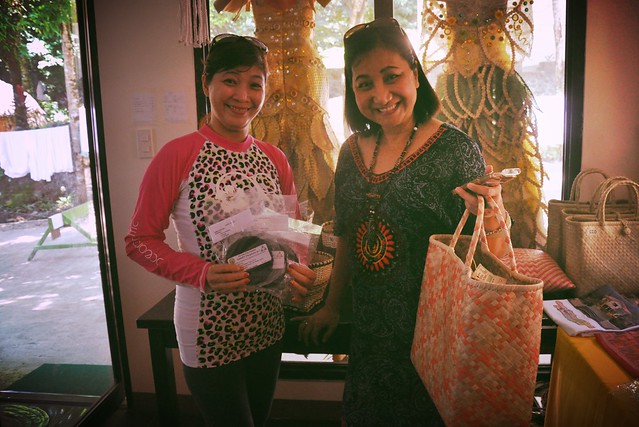 Woven sarakat aka pandan products are the town’s OTOP. Leehua bought herself a chicified bayong. Love it in a mix of summer orange. The town is also a producer of dried gamet (Porphyia.sp) or local nori. A great idea, the Sta. Praxedes Gamet Gatherers and Vendors Association pack them with accompanying indigenous recipes.

The town celebrates the annual Sarakat Festival starting middle of May. Hope to be able to go and explore more of Pagudpud’s neighbor, Sta Praxedes. 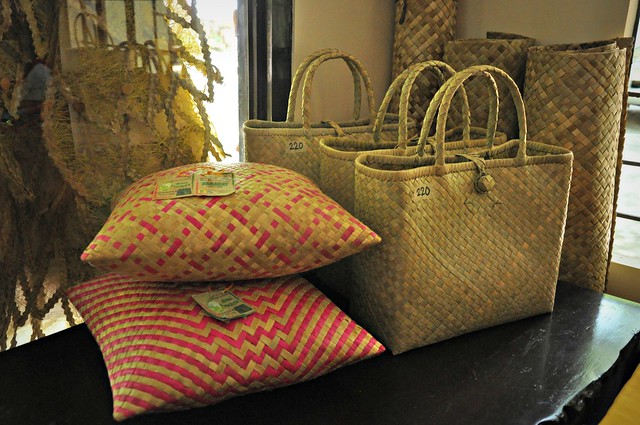 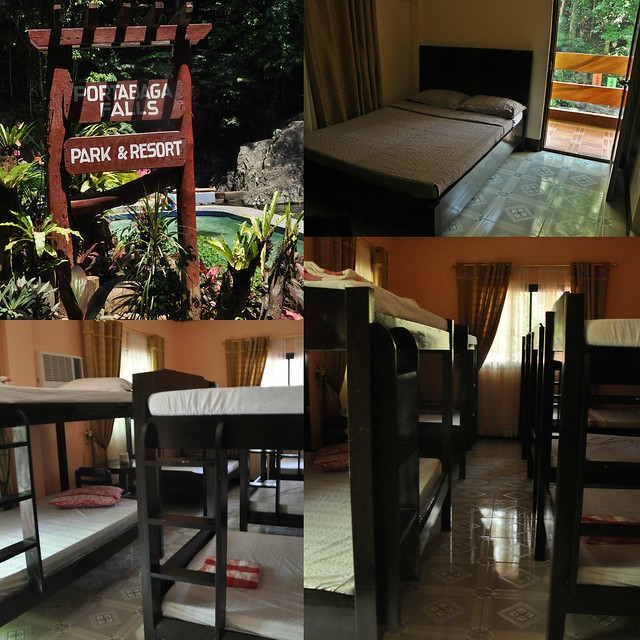 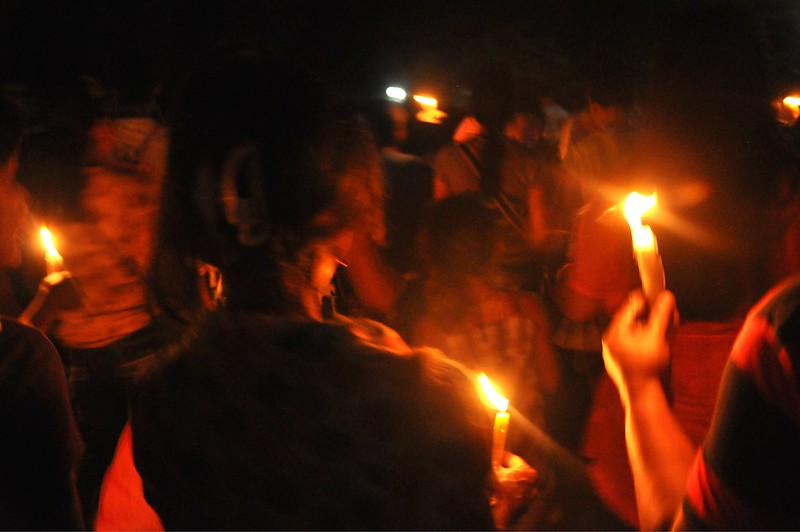 The street leading to the Basilica Minore of Our Lady of Piat was tight. Drenched in sweat, pilgrims were not complaining about muggy weather.

One of the oldest Marian images in the country and most revered by the people of the Cagayan Valley Region, Our Lady of Piat has found a home in Piat following several transfers since her voyage from Macau to Manila. 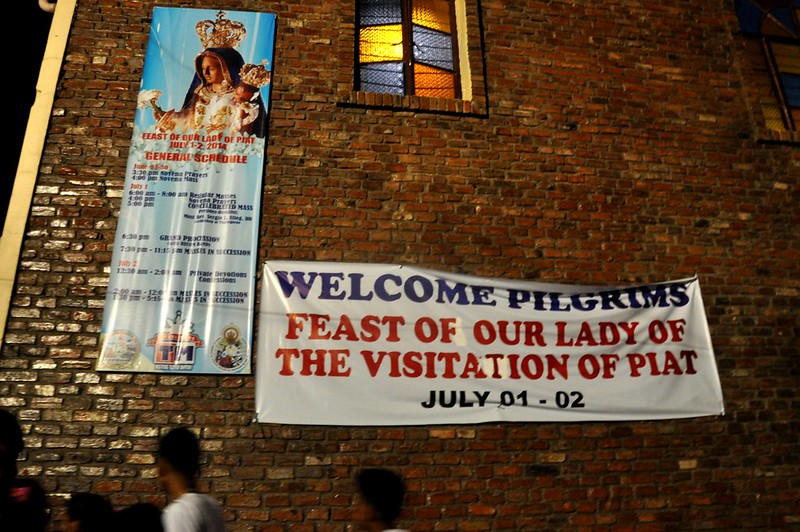 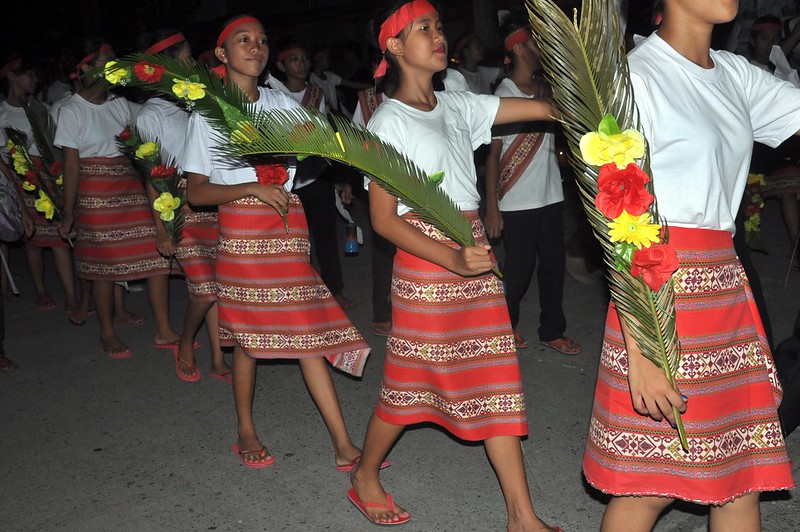 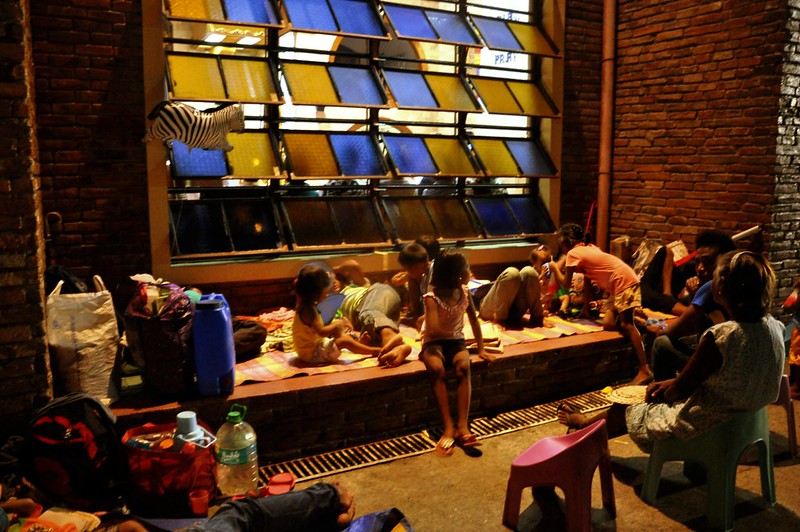 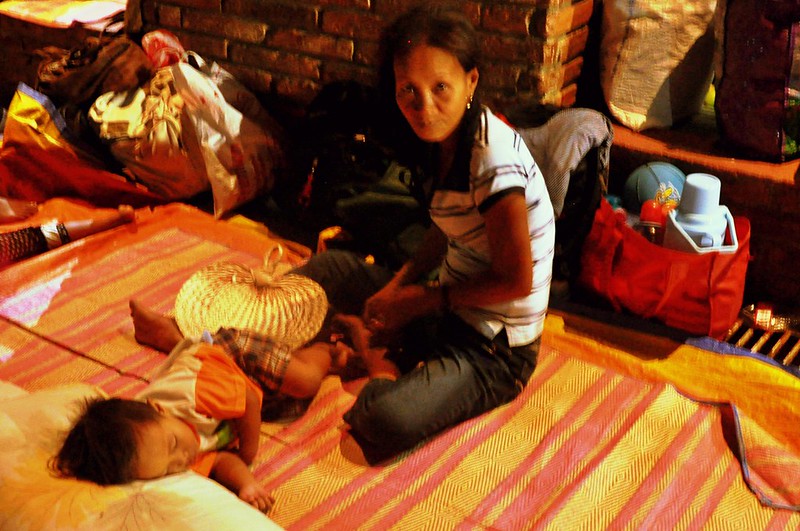 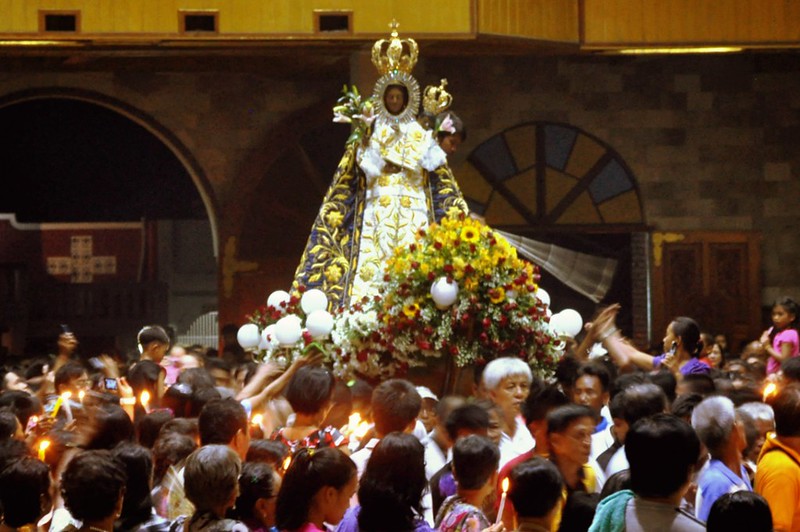 For two days, July 1 and 2, masses and novenas are held by the hour to celebrate the feast of Apo Baket, a 16th-century black Virgin Mary and an icon of influence in the Christianization of the Itawes tribes of Tabang, Malaweg, Tuao and Piat in Cagayan.

It was one of  her astonishing miracles that I did not feel exhausted during spiritual moments some friends and I shared with a thousand other people from all walks of life. 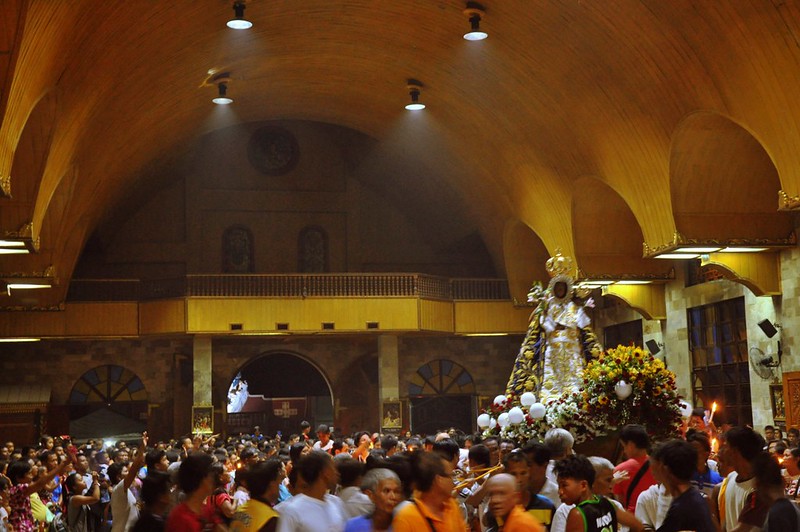 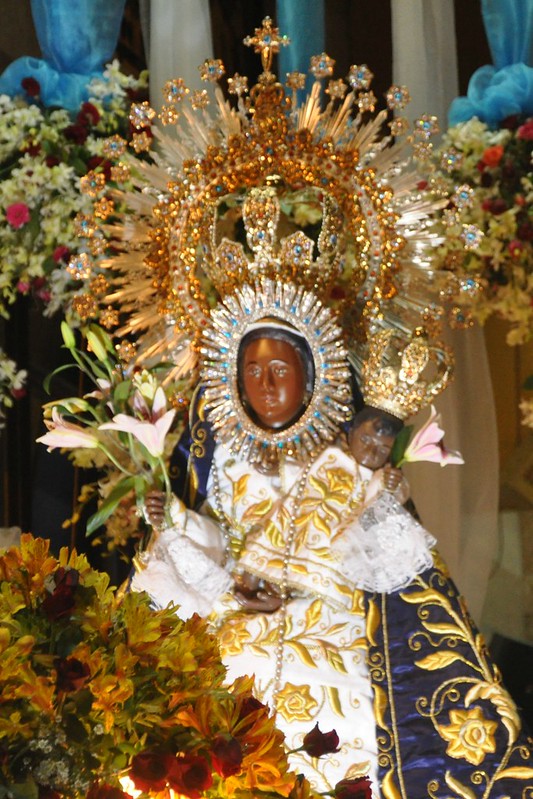 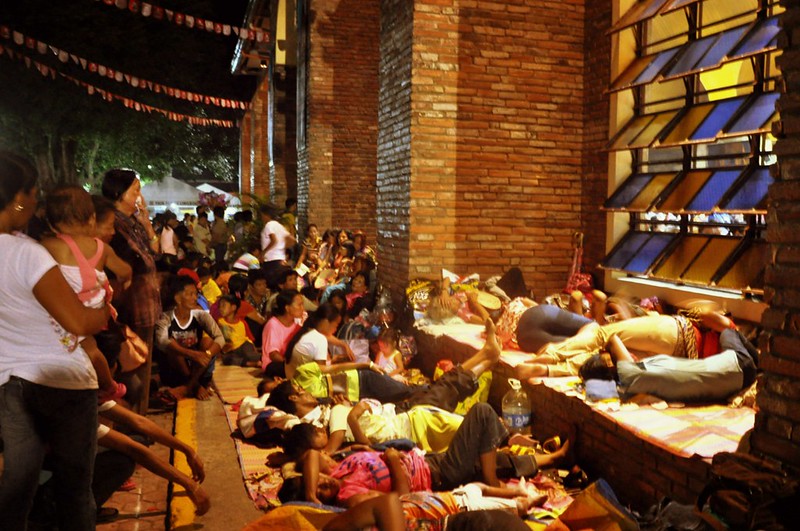 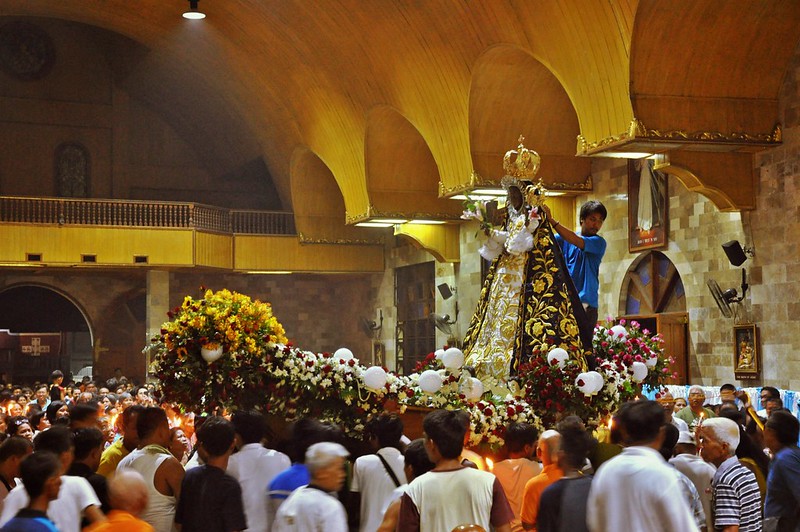 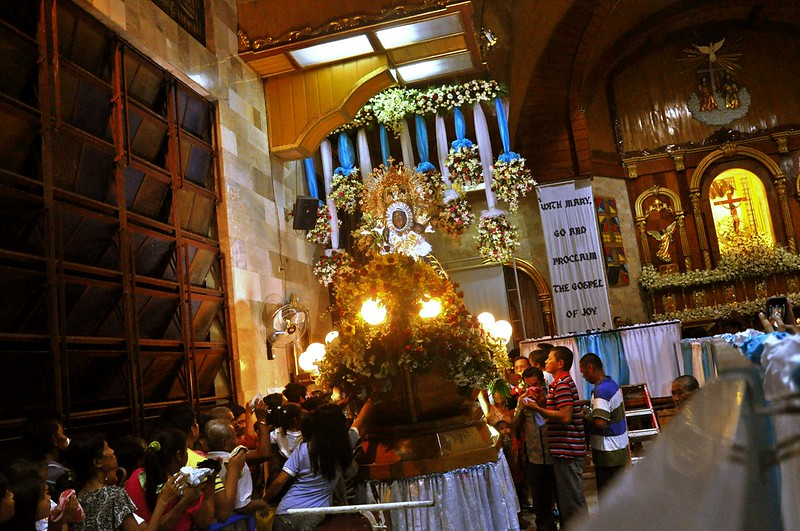 Thursday, before dawn, Reny and I joined a bunch of friends on a roadtrip to Sta. Ana in northern Cagayan Valley. In the van, I was awakened by brightness, the golden rays hitting on the frondescence, seemingly galvanizing anything and everything.

We had Chinese breakfast at the Cagayan Holiday and Leisure Resort’s Noodle House. Everyone else ordered noodles while I wanted something exotic. Setting the tone for the unexpected, the century egg and cucumber, laced with chili, and soyamilk combination in the town of Sta. Ana was strange alright. Whilst being ignited by fiery idiosyncratic eggs, images of Palaui Island, shown to me by an acquaintance from the Philippine Airlines Mountaineering Club, suddenly hit me like crazy. Almost short of begging, I asked the company if we could go boating to the ruins, even if I was geared inappropriately in burghal clothing LOL.

Thank God, I have game and giving friends! (Thanks, guys!) So as Andre Gide was quoted to have said, “Man cannot discover new oceans unless he has the courage to lose sight of the shore.”

The boat ride along the Babuyan Channel was close to an hour.

The most pristine beach I’ve ever set foot on! The 10-km long Palaui Island is a protected marine reserve as well as a wildlife habitat and an important migratory bird site. The Cape Engaño ruins lie on its northernmost tip. No one else dared to climb the 229-step plus plus under a sultry sun (which has given me a post-trek farmer-patchy complexion), but our boatman Boyet and me. Luckily, I threw a scarf into my tote before we left Laoag.

No sweat, no glory.

The same Magin Pers Y Pers that engineered the Cape Bojeador Lighthouse in Burgos, Ilocos Norte (during the Spanish era) designed Cape Engaño. I suspect the two lighthouses were designed taking into consideration the indigenous materials available at that time, like Cape Bojeador is in terracotta tiles while Cape Engaño is stone-hard and massive. According to Boyet, the lighthouse is at the moment powered by battery and not as brilliant as it used to be.

A view of nearby Dos Hermanos from the lighthouse.

Island living is a choice made by couple Ricky and Maya, the only inhabitants in the area. Though they look tough, they are friendly and accommodating. They live on tubers and fish. A more modern islander in seclusion, most of Maya’s hours are spent for cross-stitching scenery, her works usually bought by tourists.

Cruising the other side of Palaui on the way back to the Port of San Vicente was pretty scary to most of us. Pacific winds, I guess.

To me the best adventures are accidental.