The dragon influence was fierce in 2012. The excesses were unprecedented. Here’s BlauEarth in 2012 recapped.

Excerpts from “Sandboarding, Laoag, and a bashing adventure”

“I was about 10 years old when I first climbed Bantay Bimmaboy in sleepy Barangay La Paz. Those were the days when World War II US Army jeeps aka Willy’s M38s were the only vehicles that could take you to the foot of the great sand dunes of Laoag… That day of my childhood years mirrors in my mind every chance we get to visit the dunes for an energizing dune bashing adventure… Being a stakeholder in tourism, my group was asked for our specific goals and role. I told them that we just wanted to help promote our beautiful hometown, help empower the locals and influence them to take care of our natural inheritance. The trickle-down benefit of tourism is also part of why we created something unique like the sand adventure activities, which we Ilocanos are getting to appreciate more. Sometimes, we wake up and be cognizant of certain things only when we hear others rave about what we have that they don’t have.”

Got awarded Most Outstanding Alumna in the field of Environment by my beloved alma mater, the Northwestern University, expressly “for the passionate advocacy in the protection, preservation and conservation of our environment and natural heritage; and significant contribution in the promotion of responsible and sustainable eco-adventure and for deepening awareness of the need of individual effort in preventing the continuous Degradation of Mother Earth.” 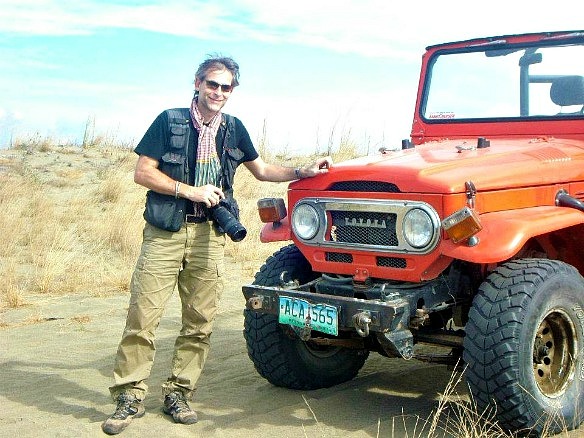 Missed the chance to meet London-based Panos Pictures photographer Chris Stowers  by a mere shower! He was in town to document sand adventure in La Paz, Laoag.

Worked my ass out, yet totally enjoyed partly conceptualizing the introduction of a new sport in the Philippines with the first ever sandboarding competition at the Laoag La Paz SandDunes for the Pamulinawen Festival 2012.

My fashion sense and sensibility were challenged in Red Dot’s 7-Day Scarf Challenge. It jolted me literally. WTF, I ditched my big yawn outfits for good.

Went on a spelunking adventure with TV Patrol Ilocos. April Chang Rafales’ brief interview with yours truly made the rounds on national TV via ABS-CBN  and ANC News. I flinched:)

Explored the nooks and crannies of Mamaruk and Palpalokada with family and friends.

GMA Kapuso Network’s Tropang Potchi picks up the Batibols story from the blog. Voilà! They traveled to the extreme north to shoot the kids and their not-so-old downhill master.

Thank God it’s summer! A month of escapades. We revisited Baguio and made a sidetrip to Dagupeña where we savored their legendary boneless bangus, binagoongang pata and Fisherman’s Soup. 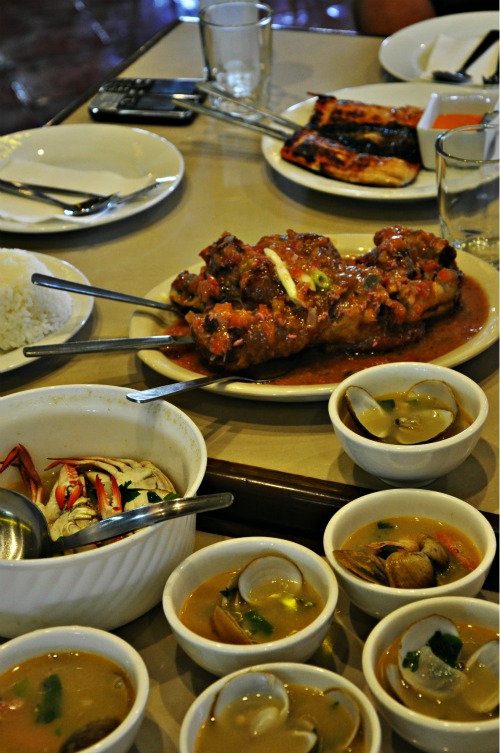 Revisited Kaangrian Falls in Burgos with friends. On a hammock overlooking a balete tree we melted in the pure beauty and quietness of nature.

Woke up to the most amazing sunrise at Casa Consuelo, an Ilocano casa by the beach in Balaoi, Pagudpud.

Rediscovered the joys of my childhood years… hahah, pawpaw in the summertime!

Meditated in my heaven on earth — Adams — on Good Friday.

Mayo was bonding time with Alexa.

In the last days of summer, we traveled to the Cagayan Valley. Visited the Cagayan Museum and Historical Research Center. 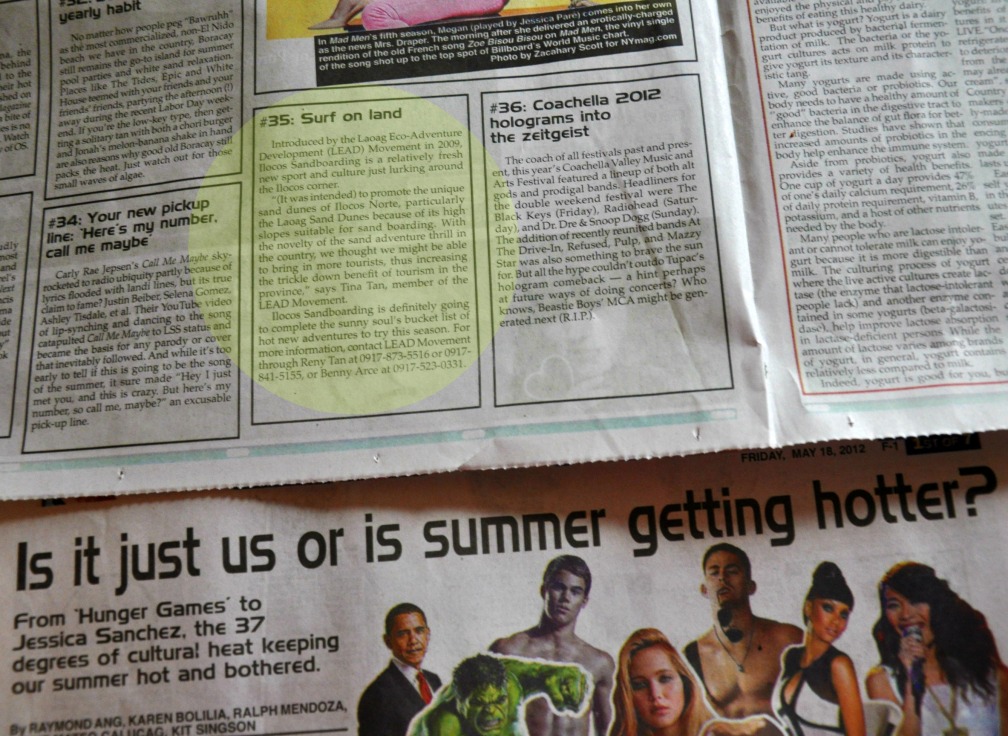 LEAD Movement’s sandboarding made the hot, hot list in  Philippine Star’s Young Star  Is it just us or is summer getting hotter? The 37 Reasons by Raymond Ang, Karen Bolilia, Ralph Mendoza, Raine Mateo Calucag, Kit Singson. A little less hot than Hunger Games and Jessica Sanchez and a tad hotter than Coachella at number 35? Hahah, amazing!

Grabbed the chance to enjoy Baguio’s great eats on a chaperoning trip with Brandon and Alex. Café by the Ruins just gets better with age.

Who would have guessed Kris Aquino’s presence at the Laoag La Paz Sand Dunes? Her researchers did a wonderful job of finding the people behind sandboarding, the new adventure in Ilocos. Such an honor for LEAD Movement to be included in the KrisTV anniversary special.

I got invited to my first national press launch by DOT and Globe Telecom for “It’s More Fun in the Philippines” and the Pinoy Homecoming campaign. It was fun meeting media practitioners and bloggers from all over the country for the first time. Talking about bloggers, hey, Senator  Sotto, ang yabang mo!

The one-fourth Chinese in me says it all…

I’ve had almost everything on the Share Tea menu. FYI, Senator Sotto, I’m a decent blogger and I’m proud to say I spend my own money on the things I blog. I do my homework veraciously. I’m so pissed off by your arrogance and the way you look at the world of blogging.

The rains kept coming the entire month. Blessings… the hubby gave me a  birthday party with close friends and relatives. And the tears… the well-loved Dept. of Interior and Local Government Secretary Jesse M. Robredo finishes his mission with flying colors.

One day,  the skies were clear.

Got invited to be a discussant at a sociology forum, Beyond the Banderitas: Festivals in Focus, organized by the Mariano Marcos State University College of Arts and Sciences Social Sciences Dept. Sociology Guild  for the Sociology Week. In between a hectic schedule, I found time to smell the flowers.

Channeled Dolphy at his favorite, Hizon’s. The QdB ensaimada is to die for!

Celebrated alone time with the hubby in Baguio.

The bummer: Senator Vicente Sotto. Awaiting the verdict for the temporary restraining order on the Cybercrime Prevention Act of 2012, I made him a non-libelous shake.

Visited and featured Museo de Bacarra before its formal launch.

Caught a rainbow in Adams. Toured my friends around my home away from home.

Featured cool exclusive stories like MODi’s interestingly chic abel stuff, the Mexico-meets-Ilocos home of Robbie and Grace Andres, Bobon Beach’s pointbreaks, a conversation with make-up maven Mara Manuel; and was invited by Red Dot’s Me-Ann Macaraeg to lunch with fashion designer Rhett Eala. And Samsung for the first Ilocos store opening at the Puregold Laoag. Not geared appropriately, I went on a random adventure in Palaui Island with my eating buddies.

Capped the year with beachy moments. Donned a bikini at Kapuluan Vista Resort in Pagudpud (photo by photojournalist Ivon Domingo), and together with my friend Leehua, we “sprinkled” the first cabana of The Cabanas homestay.

The other exclusive feature stories on BlauEarth — I had the honor to photograph and share the gorgeous Umali-Fariñas home. We entered the backdoor of Bocarot, Adams, via Calanasan, Apayao. To boot, documented the 1st Sinnalugan@Sapat Downhill MTB Challenge, the badass mountainbike race with a bunch of badass downhillers in the country.

The exclamation point to the spawning 2012 — in the middle of a love affair with downhill mountain biking, Brandon goes back to his first love and  scores a double victory in the 9th Siwawer Off-Road Challenge.

My only wish for 2013 — not another Sosottosotto!