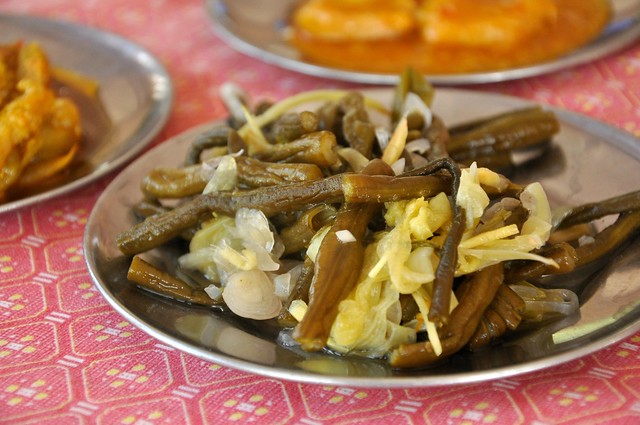 One description of Ilocano food that has stuck in my mind was made by Chef Sandy Daza. In the latest episode of FoodPrints, he said, “Ilocano food is simple, with much heart.” Having grown up with Ilocano food, I completely agree with him. Yet through all the simplicity (and almost visual flatness) of Ilocano food, Ilocano cooking varies from house to house, from town to town.

I hail from the northernmost province of the Ilocos Region. In the 80s to the 90s, road trips to and from Manila or Baguio would not be complete without breakfast or early lunch at Clarin’s Restaurant, right beside the National Highway in the poblacion of Narvacan, Ilocos Sur. We’d make it a point to make a stopover at the all-you-can-eat restaurant which serves a set menu of native dishes that includes piping hot lomo-lomo. 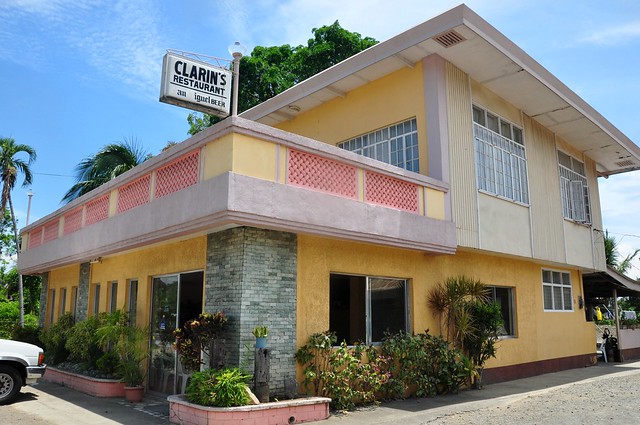 Back then, lomo-lomo (browned pork soup pepped up with kuchay (Chinese chives), tinuno (grilled pork), pork adobo, Ilocano-style afritada, imbaliktad (half-cooked beef flavored with Ilocano vinegar, lasona and ginger), igado, balatong (mongo), and their signature salad (that is actually an atchara with katuday (katuray or duboisia flowers) and utong (green beans), depending on availability, were served all at once. Refills would be brought upon request. 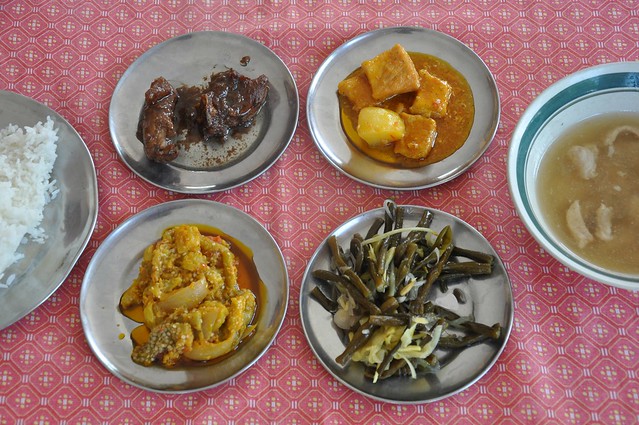 Past noontime in Narvacan, as if revisiting an old flame, the hubby stopped and snuck in Clarin’s to take a look at the food counter. He didn’t leave the restaurant without refreshing old memories with his family, most especially with his dad. To this day, the hubby (and his siblings) crave for the resataurant’s difficult-to-copy, tempered bittersweet flavor of katuday-utong salad,  tinuno and lomo-lomo.

Something caught my attention while my husband was satisfying his yearning for Clarin’s cooking. According to a hanged enlarged print of a 1990 Philippine Daily Inquirer article, entitled “Eating out in Vigan”, penned by notable food columnist, food critic and book author, the late Doreen Fernandez — her co-author of a foodie guide book, Eddy Alegre, and well-known nutritionist Sanirose Singson-Orbeta, both Ilocaos, agree that “the best eating in Vigan is outside Vigan”. 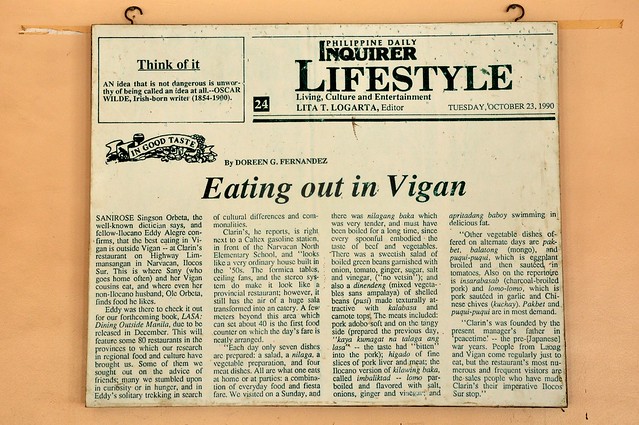 We chanced upon Evangeline Clarin, the present owner/manager of Clarin’s and daughter of the founder of the pre-war eatery that primarily caters to travelers (largely loyal customers from Vigan and Laoag). “I’m trying to sustain the restaurant.”

The hubby was late for the tinuno, but basically the same familiar viands. An all-you can eat meal costs PhP150. I complained about the lomo-lomo’s not being the same like it was in the past. She said, she didn’t put kuchay. “I knew it,” I retorted, and she smiled. Nonetheless, the salad and the poque-poque (sauteed grilled eggplant with tomatoes) were perfect. The waitress said their old cook and the owner still tend to the kitchen.

While fast food restaurants and carinderias have mushroomed along the northern highway through the decades, Clarin’s  yet keeps up with tradition. 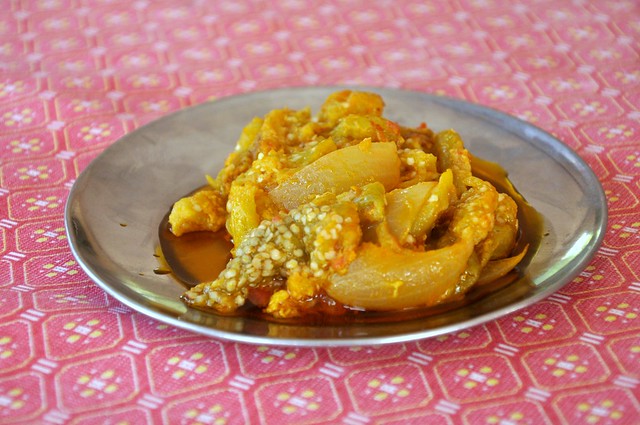