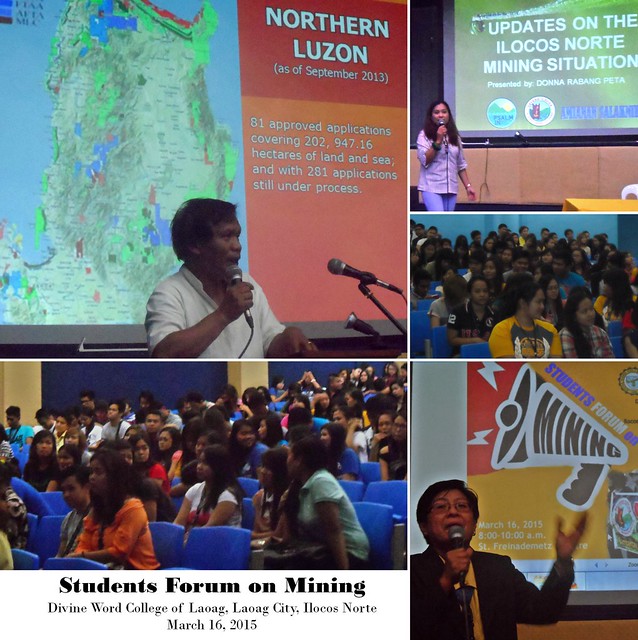 Graduating students of Divine Word College of Laoag (DWCL) gathered at the St. Freinademetz Theater on March 16, 2015 for the “Students Forum on Mining” to commemorate the 20 years of the Philippine Mining Act 1995, enacted during the presidency of Fidel Valdez Ramos.

Born and raised in a mining community area in Ucab, Itogon, Benguet, and a former small-scale miner, Mr. Fernando “Ampy” Mangili, now a member convenor of AMIANAN SALAKNIBAN, or the Northern Luzon Mine Watch and Human Rights Network, served as guest speaker.

Manong Ampy added, “In three years alone, masisira na ang kalikasan dahil highly mechanized na ang sistema at operasyon ng pagmimina. Wala pang kahit anong mining company, from Mindanao to Aparri, who rehabilitated the river system at mga bundok na nasira nila. One question to these mining companies is their identity claiming that they are responsible and friendly, and yet they never returned back to the communities na sinira nila.”

At the end of his speech, he encouraged the students of DWCL to support their advocacy, struggle to protect the environment and to defend the future.

The challenge of Manong Ampy was concurred by Ms. Romana L. Bitancor, Vice President for Academic Affairs of DWCL.  She said, “Kayo dapat ang manguna na may concern sa environment dahil you are going out after you graduate. Professional kayon ton… you have the credibility to talk about it. You should treasure what you should have learned in this gathering and tell the world when you go outside the school. Being concerned of the environment is a social responsibility”