Ages ago, I attended an intimate baptismal celebration hosted by our next-door neighbors, an adorable young Mexican couple, who later became my friends, and in fact, became godparents to my second child, who was born in Los Angeles. My mom and I were the only non-Mexican guests, but because everyone was warm, I felt so at home and enjoyed the party. I had too much of the superb pastrami sandwiches from a Mexican deli and homemade horchata. Believe me, a few hours after pigging out, I gave birth to my second girl and named her Ericke, short for Marie Veronique. The pastrami sandwich and horchata become part of lasting memories of that long and bittersweet LA stay.

I tried to make oatmeal horchata, a simple recipe Mario shared with delight. I had to tweak the recipe for the aguas frescas, though. The original horchata in Central and Latin American countries is made of chufas (tigernuts) and takes longer to prepare. In Mexico, rice is commonly used. I find the modern oatmeal horchata a healthier version. In America, horchata has become quite a trendy drink. It’s vegan and a wonderful milk substitute for the lactose intolerant.

Great on a hot day.

What you’ll need:
1 and 1/2 cups rolled oats or instant oatmeal (like what what I used)
6 cups water
1 cinnamon stick
sugar or any sweetener 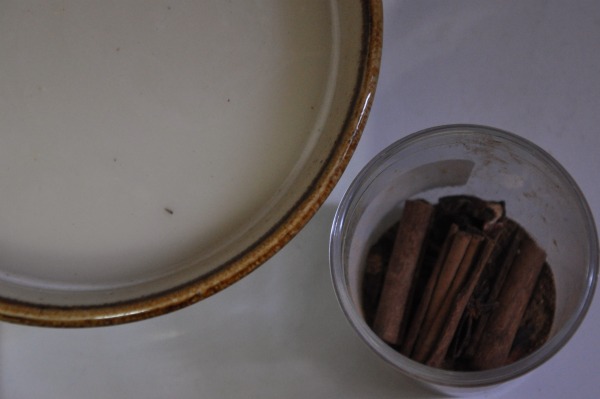 How-to:
Soak oats, water and cinnamon stick (broken into smaller pieces) for an hour. The longer you soak, the creamier the result will be.  Put mixture in a blender and blend. Strain and pour into a large pitcher and sweeten to taste. It has to be chilled well before serving.