A precocious two year-old boy sneaks into a parked delivery service vehicle, starts the engine and manages a few feet forward unscathed. At the age of seven, the same boy started driving in the vicinity of his dad’s car wash business. From then on, nothing ever stopped him from honing his talent at the wheel. The boy who showed an early fascination with real wheels just realized his dream—entering the country’s baddest off-road competition to date.

Brandon Tan, a Grade V student of Saint Santiago School Foundation, Inc., and two other members of the Laoag Off-Roaders, Glen Guerrero and Nelizer Menor, were among the 63 contenders from various off-road clubs in the country present to beat the recent Philippine Tough Track Challenge, the 8th in a series of competitions that debuted in 2001, and organized by the Manila Off-Roaders Inc. (MORI) in compliance with the NAsFOR (National Association of Filipino Off-Roaders) rules. The annual competition was conceived with an aim to promote camaraderie and team spirit among fellow off-roaders. It also serves as a venue for bench testing ideas and equipment. The still undeveloped portion at the Circulo Verde, situated on Calle Industriya, Libis, Quezon City, was converted into an off-road race track for the two-day event on November 29-30, 2008. No two competitions are the same, so no one knows what to expect each time. A new design always makes the whole race experience a unique adventure. Even some seasoned off-roaders get that spine-chilling moment by the mere sight of a new obstacle course. The Year 8 track looked like a gigantic monster waiting for its prey; the extreme v-canals and treacherous rocks and logs were its wings and tentacles, and the donut-shaped portion of the track with a deep pit at the center was its mouth. 199 Off-Road House (one of the event’s sponsors) said, “In this competition, you can see the whining boys from the real tough men.”

As Brandon, and his crew — spotter Glen and winchman Nelizer — did the walk-through prior to the race, he was unflappable. He patiently waited for his turn until he was signaled to the starting line. He braved the mean monster. By the time he reached the finish line of Track B, the event commentator said, “Brandon Tan, welcome to the Tough Track!” With his helmet clutched on one hand, he alighted his Willy’s with a smile of triumph. 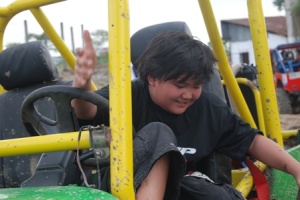 I asked him, “Do you ever get shaky during a race?” He simply answered, “No, I have an efficient crew.”  Brandon may still view off-road competitions as child’s play, so he’s constantly reminded by his mentors (Glen and his Daddy Reny) to just take it easy, get a feel of his jeep against the challenges, and enjoy the ride. Getting exposed early in competitions is excellent discipline for him. The young racer was given fatherly advice and encouragement by fellow challengers who saw his potential. He was elated when he heard NAsFOR and Bicol Off-Road Club prexy, 2007 NAsFOR Driver of the Year, Roger Peyra say to him, “Nonoy, ingat lagi, ha.”

Brandon Tan failed to make it to the Top 20, but he wowed the crowd with his courage, self-confidence and dexterity. He was the only child competitor in the Tough Track Challenge Year 8, and that alone made him a winner too. 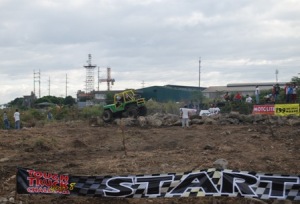 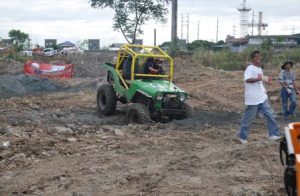